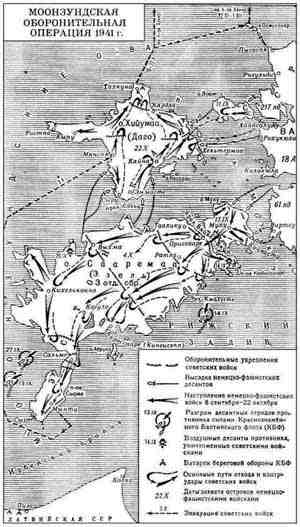 Battle of the Soviet forces and navy with the purpose to interfere action German fleet in Riga and Finnish gulf.

Moonzun island attracted German attention with the extremely favourable strategic situation. They cover entrances in the Finnish and Riga gulfs, and consequently, and sea approaches to largest political and industrial centres in the northwest of Soviet country — to Leningrad, Tallin, Riga. Without mastering by islands German navy could not render the essential help to the overland armies in offensive operations in Pribaltic. On the other side, these islands were the important strategic position of the Soviet Union by the Baltic sea. The diverse forces of Baltic fleet basing on islands, could conduct active actions not only on the average, but also in the south part of the Baltic sea theatre.

On the eve of fights for islands the garrisons them consist from connections of 8-th Soviet army and fleet by an aggregate number 23663 men. The islands Sarema and Muhu defended by a separate rifle brigade, battalion of the sea-infantry, Estonian rifle battalion, two construction (only 18615 men); islands Hiuma and Vormsi— by two rifle and two construction battalions (only 5048 men).

The defence counsels of islands had 142 coastal guns, field and anti-aircraft artillery, 60 mortars, 795 machine guns. The coastal artillery consist of 17 batteries (only 54 guns of calibre from 100 up to 180 mm). For reflection descent there were eight torpedo boats and 12 planes - fighters.

After Tallin abandon by the Soviet armies and leaving of group of easy navy forces from Mornzund, conditions in area of archipelago sharply changed for the benefit of the Germans. The islands have appeared in deep rear of enemy armies.

In the beginning of September Germans has begun the forced preparation of operation on capture of islands, for what it has allocated large ground, sea and air forces, and also numerous descent means (up to 350 various ships: 26 descent ferries, 182 assault vessels, 140 boats). The overland armies consist of three field divisions, two of which directly landed on islands, and third protected coast.

The sea forces for descent landing and support it on a coast concentrated in ports Libava, Riga, Pyarnu. Besides in demonstration actions on the eve of descent (operation " North wind ") the Finnish ships participated, including two battleships of a coastal defense.

September 8, after long artillery bombardment German armies have begun landing on Vormsi island. The islands garrison consisting of two incomplete companys and strengthened by reinforcements from Hiuma island, three day successfully reflected attacks of superior forces. Only after all opportunities of a defense were completely exhausted, the rests of heroic garrison withdraw on Hiuma island.

Having grasped Vormsi island and also Kessulide island, where defended only 16 soldiers, Germans began landing on Muhu island. During on September 11- 13 Germans artillery and aircraft impacts on defensive structures. Simultaneously the demonstration of landing descent at Syerve peninsulas to distract attention of the defence counsels from the main direction of landing has lead. September 13 to a gulf Lyu accepted descent. Soviet torpedo boats, coastal artillery and the planes - fighters have forced Germans hasty leave area of a gulf Lyu in west direction. Thus three German transports were sunk.

The next morning Germans have landed on Muhu island in two places. The garrison of an islands consisting from two rifle battalions of 79-th rifle regiment and two incomplete companys, has rendered persistent resistance, in result descent in one place was completely destroyed. At other place Germans were fixed and, having thrown here within day more than four battalions, went in offensive.

In the morning of the same day Germans has undertaken attempt of demonstration descent — this time on Sarema island, on its southeast coast. By neat fire of coastal batteries from Abruk island 12 boats were sunk and escaped have hurried to leave.

Simultaneously with descent demonstration Germans twice undertook air-landing air. Tactical air-landing, thrown out September 20 1941 in the northwest of Saarema island. The purpose was rendering assistance of offensive actions parts 61-st field division against Soviet 3-rd separate rifle brigade. The most part of air-landing was destroyed by unexpected counter-attack group of the seamen.

Germans have begun offensive on the destroyed dam and through a strait. Using l superiority, they managed to push aside our troops and advance on the south to a Kubassare peninsula. Till September 23 there were persistent fights on different boundaries. The continuous six-days fights considerably have weakened Soviet troops. September 23 they withdrawed on the Salme defensive. This boundary Soviet forces kept till September 30 and after withdraw on the central part of a Syerve peninsula. It was last boundary of a defense on Sarema island, which was kept by our troops till October 5. 1500 men with arms and insignificant quantity of ammunition leave a peninsula and withdraw on Hiuma island.

October 12, Germans with support of artillery and aircraft has made landing armies to at Hiuma island.

October 13 order from Soviet High Command to evacuate garrison Hiuma island was recived. Troops were evacuated on Hanko island. On other day in the evening the evacuation began. Till October 22, only 570 men were escape. The garrison continued heroically battle and died.

During fights for Moonzun islands the Soviet troops in interaction with navy forces, coastal artillery and aircraft have destroyed over 26 thousand german soldiers, more than 20 ships and 41 aircrafts.