Irrespective of the expected introduction of the Finns into war against the Soviet Union put forward to Kirkenes (Northern Norway) the mountain-rifle corps of the general Dietl, which in 1940 protected Narvik, had a task with the beginning of war to grasp important economically Petsamo area, taking place on the Finnish territory, and defence it from Russian. Then the mountain-rifle corps should grasp Murmansk, sole not freezing port Russian on Northice ocean.

Simultaneously six Finnish airfields with the beginning of war were transferred at disposal of German 5th Air Fleet. However in autumn the naval forces of Germany have returned on the bases, and the air forces further worked only in controllable Lapland.

June 22, the Dietl's Corps has passed the Norwegian-Finnish border and has occupied Pechenga area, not having met Russian resistance. The formations of Soviet 52nd Rifle Division deployed on territory of Murmansk area, and it 205th Regiment placed in Murmansk. In night from 21 to 22 June, 1941 the battle alert was declared. Under the order of commander of 14th Army 52nd Rifle Division should take a defense on state boundary and not admit breakthrough of the opponent into the depth of Kola peninsula.

June 29, 1941 German troops take the offensive, putting main impact on Murmansk direction, which one was defended by 14th and 52nd Soviet Rifle Divisions; on peninsulas Rybachiy and Sredniy was 23rd Fortification. 135th Rifle Regiment of 14th Rifle Division and formations of 23rd Fortifications have stopped the opponent on an isthmus of Sredniy peninsula, where the enemy was not possible to manage on the Soviet territory for a border mark USSR N1. 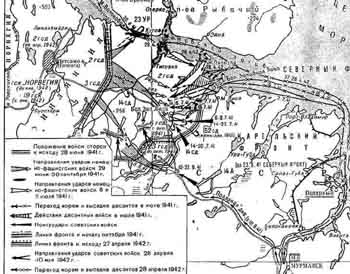 June 29, 1941 on the dawn, German Corps “Norway” by forces of two divisions, after artillery preparation has passed Soviet border and move on Murmansk. First have taken up German impact, Soviet 95th Rifle Regiment and 35th of 14th Rifle Division. Under impact of the superior forces, 95th Regiment was compelled to head out to the Titovka river. To the help of Soviet regiment was routed 112nd Regiment of 52nd Division with a task: by any cost detain the opponent even on two day. In a structure of German Corps, come on Murmansk, entered reinforced 2nd and 3rd Mountain-Rifle Divisions. In the beginning Corps fast progressed and behind some days has passed 30-40 kms. But then in outcome all of increasing resistance of 52nd Soviet division and promoting on lonely petrous tundra, the german troops has exhausted. The offensive was stopped near the river Zapadnaya Litsa. In the same time the first Soviet batallion of 205th Regiment and second batallion of 58th Regiment stop on 58-th kilometer of Mishakovskaya road to a saddle-point on the river Zapadnaya Litsa and have taken a defense. The flanks of batallions were open, and between them there were intervals which have been not held by a troops. The most dangerous position has developed at a defense of the bridge through the Litsa river. July 6, 1941 after powerful artillery preparation and bombing strikes German batallions have rushed in offensive. For July 7 for the bridge, at altitudes and in apron plain was died above two thousand german soldiers. The anonymous apron plain was nicknamed by Soviet soldiers “by apron plain of mors ”.
Due to bravery and exposure of the soldiers of 205th Regiment the defended boundary on the Litsa river has appeared insuperable for Germans.

For easing of German onslaught on this direction in night on July 8 the Soviet ships of Northern Fleet on bay Zapadnaya Litsa have landed sea-landing in a structure of a batallion of the border-guards. It has allowed to eliminate German bridgehead, and to outcome of July 8, to discard the opponent on the western bank of Litsa river. 9 and July 10 the opponent of activity did not exhibit. Since morning July 11 the main German forces have restored offensive. For 12 days of offensive the opponent has trapped only small bridgehead (6*4 kms) on eastern bank of river. For this time Germans have lost about 3000 soldiers and officers killed and injured. June 14, on the northwest bank of bay and on cape Pikshuyev, new descent by number of 1350 Soviet soldiers was landed. During 15 days descent order heroic scrambling in back of an enemy. On July 20, by joint forces of artillery, infantry and aircraft, Germans were thrust back from region dominant altitudes 314,9 and discarded on a boundary of a settlement Bolshaya Zapadnaya Litsa. During defensive combats, which one kept almost 20 days German Mountain Corps was exsanguinated.

For acquisition of the hardly consolidated Rybachiy peninsula, Germans nor had enough forces. The Englishmen came to the aid of the new ally: the airplanes raised from an aircraft carrier, bombarded Petsamo and relevant for supply of a german troops port Kirkenes. August 11 outgoing from the report, Hitler has permitted to strengthen Corps by two infantry regiments from Norway.

After a re-grouping German "Norway" Corps plotted the battle formations in one echelon. The were no reserves. The offensive supported by 10 divisions of a field artillery and 280 airplanes. At 3 hours 50 minutes of September 8, Germans have passed in approach under cover of mist. September 9, Germans were stopped, and then are discarded on a line of an altitude 173,7, northern declines of an altitude 314,9. September 15, Germans again have suffered impact, but advanced all on 1-2 kilometers. The further attacks of the opponent had no success. More severe situations was on the left Soviet flank of a defense of 14th Army where Germans passed on region of 42nd kilometer of communications- road Murmansk-Bolshaya Zapadnaya Litsa. In this situation new Soviet division of a national home guard "Polar" was generated. September 15, it left on the right flank of the opponent and have struck a blow from back. During combats Germans have lost 1500 soldiers and officers killed and some thousand injured. The German regiment's headquarters was routed, the large trophies and important documents of the German command are grasped.

The offensive on the Zapadnaya Litsa river has resulted in a local scoring of space for the germans and acquisition of bridgehead to the east of river, but the breakthrough of the Soviet defensive position again has not managed. Moreover, the historian testifies: " 3rd Mountain-Infantry Division was retracted behind Litsa". More correctly to say, that this division was routed, and its oddments are discarded for the river. The fall of numerous attacks on a river has stipulated eventually Hitler's sanction in his director N36 from September 22, 1941 on a discontinuance of the attack on Murmansk. It was necessary to refuse and acquisition of a western part of Rybachiy peninsula. The large losses in personnel have demanded immediate replacement of both exhausted divisions. To the middle of October reinforced 6th Mountain-Rifle Division thrown from Greece, has replaced 2nd and 3rd Division suffering large losses and together with the Finnish troops not carrying out a task. 2nd Division was retracted on rest and completing in the Norwegian city Kirkenes. Thus, German "Norway" Corps since June up to the end of October, 1941 during three offensives was not possible make the way to Murmansk and trap city. Corps not reach the purpose, and only has created bridgehead on the Litsa river half way to Murmansk approximately in 40 kilometers to the east of boundary. The German Corps was lost of 10,5 thousand soldier and officers from 27,5 thousand structures.