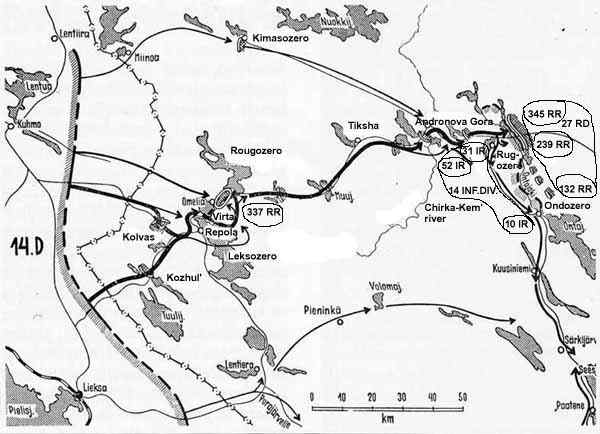 June 9, 1941 in Finland the mobilization of a stand-by structure in a troops of cover has passed, and five days prior to attack Germanium on the Soviet Soyuz in Finland the general mobilization was declared. In region to the east of Nurmes 14th Finnish Infantry Division was placed, the number by which one reached 15 thousand soldiers. In the Finnish army there were separate brigades, batallions and mild mobile squads prepared for independent operations in conditions of a forest-marshy ground and impassability. They could appear on any site of front. Soviet troops to the beginning of war was basically in permanent dispositions. For example, 54th Rifle Division was placed on directions Kem'- Uhtua- Repola in 100-250 kms from boundary. The division had shortage of such kinds of arms, as automatic guns, zenith guns, radio station. Repola direction was covered by forces of 337th Rifle Regiment. It number to the beginning act of war was 4055 soldiers. The regiment commander was the lieutenant-colonel S.Y.Churilov.

Even at night of June 22, when the Germans attacked the Soviet territory, regiment was in 200 kms from frontier. Soviet 337th Regiment has task not admit promoting of the opponent to Kochkoma station. From defensive regiment's line to the Soviet Frontier was about 30 kms. The frontier in Repola region was guarded by 73rd squad, which one together with 491st howitzer was transmitted in strengthening 337th Regiment.
On Reboly direction Finnish offensive by the main forces of 14th Infantry Division began on July 4. It came by two columns - in Kolvas Ozero direction injected on the main road Reboly - Rouzozero, and in Tulevarskom, a little to the south.
Churilov has constructed the battle formations a regiment in two echelons, having centred two batallions in first and one - in second, in Reboly region.

Having knocked down Soviet frontiers formations, 14th Infantry Division of Finns have engaged in combat with forward squads of 337th Rifle Regiment. To outcome of July 6, Finnish infantry was possible managed to the main defensive boundary driving from lake Bolshoye Maz'yarvi through lake Kolvas to lake Kozhul'. In the morning Finns began fissile offensive operations, but its attacks were repel. However Finns have not kept attempts to rip leading edge of Soviet defense and for following day wedge in the battle formations of Soviet regiment between lakes Maz'yarvi and Chene. Under threat of encirclement was 2nd Soviet batallion. It began retreat and by evening became apparent, that this settlement cannot be held. From commanding of 7th Army obtained the sanction to depart on new positions.
On July 8, Soviet Regiment has taken a defense on a boundary Yemel'yanovka- lake Tarakshino. The groups of the sappers mine the approaches also have blasted bridges. For following day Finns again has appeared and within three day acted by small-sized groups, groping weak places in Soviet defense. Simultaneously conducted a re-grouping of the forces, making dispositions to decisive offensive with the purpose of rout 337th Regiment on these line. It began on July 12. The main impact was put in a direction of road Virta- Yemel'yanovka. A persistent combat here was knotted. Neither the numerous Finnish attacks, nor massive fires of his artillery could not shake of Soviet defensive formations. After two-day time bitter battle, Finns having convinced in uselessnesses of further head-on attacks, refer to on starting positions.
Relative at the front has set in calm, which kept about eight days. During this time Soviet forces consolidated defense, and the opponent conducted reconnaissance and bombardment from artillery and mortars. There were attempts to attack Soviet leading edge,on separate segments, by forces from a company up to a batallion. This act was estimated by Soviet Command as preparation for new storm. As has appeared actually there was only visibility of activity, attempt to mask the true intentions, which one, unfortunately, were not uncovered by regiment's reconnaissance.

Hereinafter events on Repola direction developed as follows. The re-grouping Finnish troops kept till July 20. One Finnish regiments forced Leksozero and has trapped bridgehead on it eastern coast. July 21, 14th Division has passed in decisive offensive. Holding down a part of Soviet formations from front, main forces has bypassed of 337th Regiment from the south and has left to him in back, cut off road Yemel'yanovka - Rugozero. The impact of Finnish forces was unexpected for Soviets. 337th Regiment has appeared in encirclement, and the unique road on on east, was bridged over. It was accepted the solution to be breached on east lengthways roads on Rugozero. The withdrawal kept six day. For this time 337th Regiment has passed 150 kms on impassability and has left in Chelmozero region. Now Reboly direction has appeared open for the Finns. There were no Soviet formations on a road Repola - Kochkoma, except rear units. These forces were too weak for severe resistance. Under onslaught of the Finns they slowly retreated out on the east.

Thus, the defensive combats of 337th Rifle Regiment on Repola direction in July, 1941 have ended for the Soviet troops unsuccessfully. The superiority in strength of the Finns in living force and arms has had an effect. There was also subjective factor: an incorrect estimation of enemy actions, inattention of Soviet commander to reconnaissance and defense of flanks.
After withdrawell of 337th Regiment for Finns have appeared a capability of a unobstructed output to the Kirov railway. To stop promoting 14th Infantry Division of Finns, the reserves were necessary. However at the command of commanding Soviet 7th Army was not free formations. Taking into account this situation, Soviets makes a decision to obtain indispensable forces for cover Repola direction in place . For this purpose on station Kochkoma the group of the staff officers of army was directed.
Military with assistance of local Soviet and Party organs have formed from guards of Baltic channel and aerodrome, workers of militia and local population an impact rifle batallion by number up to 550 soldiers. By 7 o'clock in the morning of July 27, the impact Soviet rifle batallion was already on a march. After tiresome 150-km paths on a dusty ground road the batallion straight off has entered combats with the opponent on 147 kms Reboly highway. For following day in arrangement of our troops came from encirclement 337th Rifle, 491st Artillery and main forces of 73rd Border formations. The people were exhausted up to a limit. Dirty, torn off, tired and hungry, they fall on ground and instantly filled in. This forces later have converted into 239th Rifle Regiment. Thus, by July 30 in conditions of heavy defensive combats from separate squads and subdivisions, two Soviet rifle regiments, integrated in Repola Operating Group were generated, the aggregate number by which one made 5500 soldiers. The defensive line on Andronova Gora was generated during three days. From August 4 till August 9 Soviet formations fight for this line. After unsuccessful head-on attacks Finns attempted again to leave for back defending. Soviet command has solved an intention of an enemy and has taken measures to avoid encirclement. On the night Soviet 337th Rifle Regiment was moved in region to the west of Novay Tiksha, where should be main Finnish forces. Soviet soldiers have met the opponent, where he did not count resistance. Intentions of the Finns to bypass Soviet defense have failed. The heavy combats on the river Chirka-Kem' have begun. Only on the sixth day the Finnish troops managed to rip Soviet defense and leave on the eastern bank. Soviet command has found expedient to allocate the main forces on the beforehand prepared boundary behind the Pizma rivers. It was made at the night.

August 10, Repola Operating Group was converted into 27th Rifle Division. It formation drove from August 11 till August 19, 1941 in Rufozero on the basis of formations facing on guards of boundary on Repola direction prior to the beginning war, and also 3rd mountain-rifle, Siberian and Segozero batallions, updating arriving this period. 27th division had as primary goal deduction of the opponent on a boundary Pizma river. The defense was organized on the right bank of the river. The main road going on Rugozero and further on the Kochkoma station, covered by 337th Rifle Regiment, more to the left up to a southern shore of Rugozero lake 73rd boundary squad was dug round, still more to the left has taken positions 3rd mountain-rifle.

In the second half of August, 14th Finnish Infantry Division take the offensive. At last, September 6, Finns were possible managed a defence line on a segment of 73rd Soviet unit on depth up to one kilometer. The further promoting, was stopped by counter-attack by Soviet formation of 337th Rifle Regiment, though the initiative still remained with the Finns. September 8, having held down Soviet forces in center, they have bypassed the right flank of a division and again have endangered of an exit on a road Rugozero-Kochkoma, already from the north.
September 11, 27th Rifle Division has stopped defensive combats in Ruzozero region, has retreated on the main boundary to the east of village. To this time the division was already finally formed, its regiments have received the numbers 239th, 345th and 132nd Rifle, 53rd Artillery.

27th Rifle Division have received for a defense line of width about 50 kilometers, passing from a southern shore lakes Kompakovskoye up to a northwest shore Ondozero. Approximately to a centre of division's defense drove Rugozero-Kochkoma highway. The segment of terrain of width about 18 kilometers arranged on a both side of a road, was most accessible to troop operations. Main forces of Soviet division also were centred.
Its battle formations were constructed in two echelones. In first there were 345th and 239th Rifle Regiments, in second - 132nd without one batallion. In forward regiments too there was a double defence line. The open flanks of regiments were guarded by separate garrisons by number from platoon up to a company and reconnaissance. For cover of the left flank of a division on the north-east shore of Ondozero was put forward the first batallion of 132nd Rifle Regiment.

And on the eastern bank of the Onda river 14th Infantry Division have taken positions. Their 52nd Infantry Regiment shortly after the offensive has unsuccess, was transferred in a reserve of a division. Instead of it on forward 31st Finnish Infantry Regiment was put forward. 10th Regiment kept fissile operations on Padansk direction. At the end of October this regiment has incorporated in the south with advancing Finnish squads on the Voloma river also has taken under the control Ondozero segment of front.