Fight for Donbass and Rostov.

Structure of 18th and 9th Armies on September, 20.

On Manshtein's memoirs on September, 26 Russian have struck on the 30th German Army Corps. " Impact on front of 30th Army Corps did not make success, but conditions became rather intense. But in a strip of 3nd Romanian Army the opponent (Russians) has brought down 4th Mountain Brigade from positions and has punched in front of army a gap in width of 15 kms. This Romanian brigade has lost almost all artillery. Two other Romanian brigades also have had the big losses ".

September 27, Germans have promoted to Novomoskovsk (10 kms to the north of Dnepropetrovsk), Spaskoe.

Before the termination of the Kiev Battle, German divisions located on the southern flank (3rd Panzer Corps). On the southern direction from the Dnepropetrovsk bridgehead and near Novomoskovsk have destroyed three Soviet divisions. Having compelled the Soviet formations on the Dnepr river to be rolled away to the Zaporozhye, 1st Panzer Army has promoted to the east, and then on the south, move in rear to the Soviet forces which detained German 11th Army at Militopole.

October 5, 1st Panzer Army in structure of three Panzer and two Motorized Divisions, has broken in area Sinel'nikovo and distributed to the southeast. To outcome of day, in area Omel'nik, Orehov, Zherebets, have left not less than one German panzer and one motorized divisions. Advanced German formations have occupied Guly Pole and Pologi. Simultaneously Germans take to offensive on Melitopole direction by forces of three infantry divisions. On a site of Novo Nikolayevka, Orehov, break up to 40 kms was formed. Soviet formations of 10th Reserve Army occuped defensive boundary, but reliable defense of Dombass, may not provide. The military council of Southern Front has decided to remove 18th and 9th Soviet Armies on a line Guly Pole, Alekseevka, Dmitrievka.

In result of battle which have finished October 10, Soviet 18th Army was destroyed, its commander was lost and 65 000 soldiers appeared in a captivity. Trophies of Germans - 125 of tanks and 500 guns.

October 10, as result of defense organization on Taganrog and Rostov line, in structure of Southern Front are transferred 339th and 31st Rifle Divisions (boundary Matveev Kurgan, Taganrog) and 66th and 68th Cavalry Divisions ( boundary Don river from Azov up to Sal river).

TimoshenkoÆs initial plan was to use one division (99th) released by 18th Army, a cavalry corps from 9th Army, and several tank brigades, supported by the bulk of Southern Front aviation, to counter-attack through the growing gap between 9th and 18th Armies as they were pressed back by the German advance. Cherevichenko was pessimistic over the prospects for carrying out such a regrouping, but Timoshenko remained confident of his plan and sought forces from the STAVKA to implement it. At his urgings the STAVKA assigned to him the newly formed 37th Army which consisted of four weak rifle divisions (4th, 176th, 218th ,253rd). This measure proved critical, for the German attackÆs progress had forced immediate commitment to battle of the 99th Rifle Division and one tank brigade. Timoshenko thereafter steadfastly refused to relinquish control of any more of his reserves as he went about assembling his counter-attack force.

The report of Commander of Southwest Direction N3098 to Supreme Commander of the decision on defense of Northern Caucasus. (November, 8 1941)

Two German panzer divisions and one motorized, striking a blow in general direction Kuybyshevo, Shahty, have rejected formations of 9th Soviet Army to the east and came to morning 8.11.1941 by basic grouping in area Dobropol'e, Agrafenovka, Krepinsky. As a result of this impact Soviet 9th Army, had large losses (especial 136th, 150th, 30th Rifle Divisions), departs on boundary Birukovo, Novoshakhtinsk, Grushevsk. The nearest days it is necessary to expect transition in offensive of all main German forces (six Infantry divisions, two panzer divisions, two divisions SS and the Italian forwarding Corps), concentrated against Southern Front and 56th Army. The begun offensive of the opponent to the south, probably, pursues the nearest purpose to cut off railway Rostov - Voronezh and came to the high of Don river and seize cities of Novocherkassks and Rostov. Simultaneously the opponent will try to push aside 12th and 18 Soviet Armies behind Northern Donets river. Later on it is possible to expect, that Germans have intention, having tightened reserves (up to 6-7 Infantry divisions, 2-3 Panzer and Motorized) from depth to intrude limits of Northern Caucasus.

With this purpose Military council of South-eastern Front has decided:

1. In addition to allocate from structure of South-eastern Front for strengthening of Southern Front 216th, 295th Rifle Division, 3rd Tank Brigade, 558th, 754th Anti-tank Regiment and 600 anti-tank dogs. To include all these formations in structure of 37th Army.

2. To oblige Military council of Southern Front to allocate in structure of 37th Army all again formed divisions (4th, 51st, 176th, 218th Rifle, 35th, 56th Cavalry) and 15th Tank Brigade, having concentrated them during the nearest days in area Krasnodon, Tatsin, Kamensk with a task of preparation of drawing of counterstroke on the southwest in flank and rear of the main grouping of the opponent.

On 10 November, Timoshenko shifted two rifle divisions (216th, 259th) and a tank brigade from the Southwestern to the Southern Front, the first step in creating a Southern Front reserve. Two days later Antonov revealed his initial counter-attack plan which involved the use of 37th Army, one rifle division and one cavalry division of 9th Army, and two rifle divisions of 18th Army in an attack against the left flank of the advancing German force. These assault forces would concentrate for the attack from 11-15 November and commence the attack on 16 November.

AntonovÆs plan sought to achieve surprise, halt the German drive on Rostov, and alter the direction of the front attack should the need arise. Therefore the STAVKA approved it. The most difficult challenge was to assemble counter-attack forces secretly, in particular General A. I. LopatinÆs 37th Army. (37th Army consisted of six rifle divisions [51st, 96th, 99th, 216th, 253rd, 295th], three tank brigades [2nd, 3rd, 132nd], four artillery regiments, and four anti-tank artillery regiments.) Two divisions of 37th Army and those of 9th and 18th Army were already in the region. The remaining divisions had to be moved a considerable distance to 37th ArmyÆs assembly area in a very short period of time. Since it was clear that two divisions of the Southwestern Front (216th, 295th) could not make the move in time, they would be thrown into battle as they arrived. The remaining four rifle divisions would attack as planned. Despite difficulties, the four divisions reached their assembly areas covered by a tight cloak of secrecy. Some supporting units (one tank brigade and an anti-tank artillery regiment) were also unable to assemble on time. Although Cherevichenko delayed the operation for one day, an angry STAVKA forced him to launch the attack on 17 November, albeit with only four rifle divisions and two tank brigades.

From Western Front on the south there was a line of Southwestern and Southern Fronts, which together made a Southwest Direction. The Soviet Commander of this direction was marshal S.K. Tymoshenko. To the beginning of November he responded front length from right up to the left flank till a straight line almost in 700 kms. Tymoshenko has nine Armies (3rd, 13th, 40th, 21st, 38th, 61st, 12th, 18th, 9th), but without reserves. (Last reserve - 2nd Cavalry Corps - Stalin has taken away from Tymoshenko to Western Front just in the beginning of November). In that time Tymoshenko has asked at Stalin the sanction put flank impact, which route shock German forces - 1st Panzer Army.

Tymoshenko has asked from Stalin not soldiers, only weapon: " 30 thousand rifles, 500 machine guns, 200 antitank guns, 150 field guns and 200 tanks ". Stalin has kept silent. Tymoshenko has reminded November 5, has received in the answer: " To expect to the aid of centre it is impossible. Do not forget about events under Moscow ". But at this time forces of  Tymoshenko were beaten off from Germans. 1st Panzer Army was torn to the south. Tymoshenko again has reminded to the Soviet High Command about weapon on November 9, but has received the answer from the chief: " Commander Tymoshenko should completely rely on own forces ". And Tymoshenko from all sites huge, but weak-willed front began to collect everything, that is possible, forming in a place of prospective impact new 37th Army. Could collect: four Rifle divisions, four gun Regiments, four Antitank Regiments, tree Tank Brigades and 3 armortrains. In the second echelon Cavalry Corps and NKVD Brigade. In shock group we surpassed Germans in man and artillery, but conceded in tanks. Tymoshenko carefully has checked up all details of operation: the armies have received winter regimentals; the car column for shuttle service of an ammunition and export wounded - 380 lorries, 40 tractors and 30 sanitary automobiles was assembled huge for Red Army of that time. 37th Army should pass on German rears about 100 kms.

Germans could strike under the basis of a wedge of 37th Army and surround it. The specially allocated Soviet forces from 18th Army (two Rifle division) and from 9th (one rifle and one cavalry divisions) should cover 37th's Army offensive. 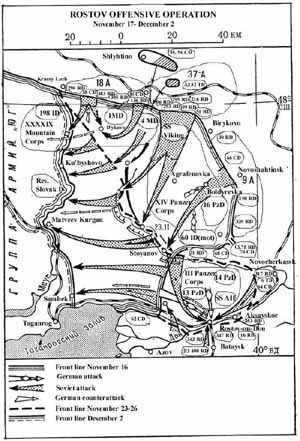 The shortest road for Germans on Caucasus conducted along bank of the Azov sea through Rostov-on-Don. Tymoshenko has ordered here to be buried in ground forces of Southern Front. Only antitank defense districts in Soviet 9th Army area were nine. By 4 November KleistÆs panzers (13,14 and 16 Panzer Divisions, SS ōLeibstandarte Adolf Hitlerö, SS ōVikingö and 60 Motorized Divisions) had crossed the river on a broad front, secured Taganrog, and poised themselves for a thrust into the great bend of the Don River or toward Rostov. November 9, Germans began offensive, where waited. On advance guard went 1st Motorize Division SS. 60th Motorize and 14th Panzer Division have bypassed of Rostov from the east. 1st Panzer Army, losing tanks and people be wedged in Soviet defense.

Tymoshenko continued to prepare impact. November 17, he has struck under the basis of German impact. The offensive of 37th Soviet Army began on November 17. Usually it begins by artillery preparation. But not so Tymoshenko. He has sent scouts to look: what Germans have felt, whether have allocated for night the forces, that we have issued preparatory bombardment in empty place? Precisely! Germans withdrawed on 8 kms. Them have caught up and already here have covered by bombardment.

November 18, 1st Panzer Army also has broken through front of 56th Soviet Army, protecting approaches to Rostov. But by November 19, 37th Soviet Army rout XIV German Mehanize Corps and has left in rear of German forces. On November 21, Rostov on Don was taken by Germans.

" The Opponent, had in the big losses, has occupied Rostov. Offensive of Southern Front develops slowly. The Soviet High Command ordered a striking force of Southern Front to lead resolute offensive with the purpose to strike on rears of group Klejst which have occupied Rostov. Loss of Rostov does not cancel a task of impact in rears of group Klejst, and, on the contrary, strengthens necessity of occupation of Taganrog ".

November 22, 56th Army was strengthened by  440th and 398th Rifle Divisions, 54th Tank Brigades (these forces did not arrive from ZF). On November 23, 37th Soviet Army and formations of 9th Army stoped on the Tuzla river in Germans rear. German Commander at last has understood that they are in encirclement.

Anyway, but Tymoshenko on November 23 has rearranged the forces and moved their direct on Rostov. Germans have not sustained, have left Rostov and, throwing engineering and weapon, have jumped out from encirclement. November 29, Rostov-on-Don was released, and 1st German Panzer Army practically was routed. Marshal S.K.Tymoshenko has released the first Soviet large city in that war.

It is necessary to understand the reason of Hitler excitation - for the first time since September 1, 1939 there was routed a whole German Army and at the expense of art of the Soviet Commanders.