" September, 16 new (appointed instead of Budenny) commander by the Southwest direction - Timoshenko has caused to itself in a study, arrived from Kirponose the deputy chief of an army headquarters of Southwest Front Bagramjan. Timoshenko, reflecting, has told to Bagramjan: Now we make everything to help front: we pull together on Romny and Lubny all our forces which could collect, including Belov's Corps increased by tanks and three separate tank brigades. In some days divisions of Rusiyanov and Lizukov will approach to us. These forces we shall try to make the way towards to the surrounded troops of front. We realize what to rout two broken fascist Tank Armies we can not, but we shall create gaps through which there can be surrounded troops. The purpose of our impacts. We are sure, that in created conditions Soviet High Command will allow to depart to Southwest Front to the river Psel, therefore and have decided to give now the order on the organization of a breaking out from the encirclement. Today we again shall try to talk to Moscow. I hope, that we will manage to convince the Staff. For now we shall negotiate, Kirponose and his headquarter should take advantage of that the opponent still does not have continuous front of encirclement. "

September, 19. Soviet High Command has ordered 47th and 76th Mountain-Rifle Division with its full complement, with all units, staff, arms and property send at disposal of the commander of the Southwest Direction. Station of loading: for 47th Slavyansk, for 76th - Stalino. Begine of  loadings for both divisions September, 6  00:20. Areas of a unloading: for 47th - station Iskrovka, Vodynaya, Kovyagi, for 76th - station Merefa, Dzhgun, Vodolaga.

September, 19-21. Cavalry-mechanized Group of Belov (2nd CC) conducted successful fights for city Romny. Group of Kamkov occupied front Ljuten'ka, Belotserkovka. Thus this counterstroke was rendered against rears of the German 47th Panzer Corps moving on the south, and promoted an exit from an encirclement units of 21st and 5th Soviet Armies.

Toward the end of September 1941, after having forced the Dnieper River near Kremenchug, the German XXXXVIII Panzer Corps (consisting of the 9th Panzer Division and the 16th and 25th Motorized Divisions) threatened to break through between the 40th and 21st Armies of the Southwestern Front that were occupying a defensive line running from Sumy to Akhtyrka.

The 2nd Cavalry Corps of General Belov was brought into action by the front commander to defend the interval between the 40th and 21st Armies. By 27 September, the 9th Cavalry Division had taken up the defense along the line Zelenkov-Kozelyonnoye, while the 5th Cavalry Division was at the line Khorol- Beyevo.


On 28 September, units of the German 9th Panzer Division and 25th Motorized Division struck the defensive positions of the 2nd Cavalry Corps, seeking to break through to the Sumy area. The German main attack, involving 52 tanks and a regiment of motorized infantry, was directed against the sector held by the 5th Cavalry Division. The Cavalry was forced back first to Vasilievka and then cut into two groups: the 11th and 96th Cavalry Regiments withdrew to the southeast while the 131st and 160th Cavalry Regiments withdrew toward Galushkin where they linked up with the 9th Cavalry Division. The latter was
under heavy attack and was half encircled, but it was able to fight free, and that night it withdrew to the Lutsinovka-Markovka area.

On 29 September, the 1st Tank Brigade (equipped with new KV and T34 tanks) counterattacked the enemy who was widely deployed generally northeast of Podoprigory, Pavlenkovo and Shtepovka and destroyed 17 tanks, knocked out over 100 personnel carriers and took much botty.

Capitalizing on the success of the 1st Tank Brigade counterattack, the 2nd Cavalry Corps on 30 September went over to the counteroffensive with the objective of defeating the enemy forces that had succeeded in wedging in between the 40th and 21st Armies. After a hard-fought two-day battle, on 1 October the 9th Cavalry Division of General Bychkovsky, reinforced with
tanks, took Shtepovka.

Small panzer grouping of the enemy has promoted to Novomoskovsk, Spaskoe. The Southern Front has no reserves here. The Soviet High Command ordered to strike a blow in flank and rear of the opponent by tank brigade, 275 RD and 28 CD. 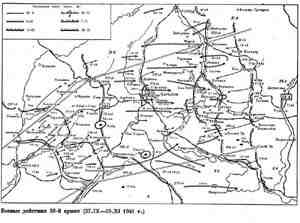 On the fifteenth day Germans use the favourite way of action-detour of flank formations which defense they be able to not break through. With that
purpose they in October,6  have started attack against the right flank of
the left neighbour of 1-st GRD - 295th RD. Germans managed to break rather easily resistance the right-flank 884th RR these divisions exhausted in
fights, force Psel river, leave in Veprik area and create threat to the left
flank of 1st GRD. For guardsmen this example of the enemy was not new. According to the decision of the commander on liquidation of the put opponent, command by a division has thrown 85th RR under command N.D.Kozina and one battalion of Voronezh Regiment.

Besides temporarily position and the right neighbour of a division has worsened. Working here 2nd CC was removed from fight in area Graivoron. Using the site not occupied with Soviet forces, the opponent already in October, 7 has approached to the river Psel which on this site has formed a bend, pressed in our arrangement more than on 20 kms, and without fight
began a ferry from the river.

In consequence of such position in strips of neighbours 1st GRD, continuing to keep the strip, appeared deeply encirclemented by the opponent from both flanks. In this conditions command of a division has received the order of
the commander on a withdrawal on an intermediate boundary on front Velikii Istrop, Buimer, Oleshnia, removal on 30-50 kms from a boundary occupied with German formations of a division.Successful actions of groups of covering have allowed units of a division is organized to make an exit on specified line and to morning October, 10 to organize defense in a strip up to 40 kms.

Fierce fights with the opponent, grasping bridgehead in area Veprik, proceeded during four days Germans accumulated forces on bridgehead. But guardsmen Kozin the fire and counterattacks broken enemy divisions and they could not promote. Position on this direction began to be stabilized. Then Germans, even during fights in area Veprik have begun to force Psel in
several tens kilometers to the south, have strengthened there piles an impact and by October, 9 have pressed units of 295th RD almost on 50 kms to the east.

47th Mountain-rifle Division in the first offensive as a result of panic chaotic withdrawal has lost 23 guns, 7 mortars.

The opponent, already having tested resistance of guardsmen, the beginning did not try on this boundary by large forces to attack a division from front. Having against a division about a Regiment, the opponent aimed the main forces to the north and to the south of a strip of its defense. He aspired impacts on flanks  of 1st GRD to surround it and destroy. Under an impact of the main German forces, 227th RD from right and 295th RD from left all time departed to the east. October 14, 295th has left Akhtyrku, and 227th RD to outcome of October 15, occupied a boundary to the north Riasnoe, concentrated in 40 kms to the east of a boundary on which formations of 1st GRD defended.

When Germans on flanks of 1st GRD has far promoted to the east, they began make strong attacks and against its formations from front not give Russians an opportunity to come off. But units of a division did not gather to depart yet. The commander of 21st Army, despite of adverse developing for a division conditions, categorically demanded of division to keep occupied
boundaries. Formations of a division, carrying out the order, persistent fights with the opponent which it was torn on Baromlia and Trostianets. A special pressure these days fights 331 RR in area Baromlia have reached. The withdrawal of a division was carried out by two columns: left 85th both 331st RR and 1st Battalion of 4th RR; right - other parts of a division. To outcome October, 19 the right column of a division move about 30 kms, has concentrated in a wood northwest of Zamostye. Having given two hours rest to staff, general-maior I. N. Russiyanov has set a column further. And it approached to morning of the next day to Lomnaia. But move it further was impossible, as the opponent has occupied at 12:00 October, 19, Graivoron,
aspiring to move in a northwest direction on Borisovka, having cut off ways of a withdrawal to the right column. The left column of a division, moved a little bit faster then right and morning October, 20 already was more significant to the east.

Record of negotiations of the deputy chief of the Main Military Staff with the chief of army headquarters of Southwest Front.      October 20

... 40th Army by the main forces was on a boundary Soldatskoe, Beloye, Gotny station; its reserve group Chesnov's - is concentrated in Voznesenovka.

21st Army on boundary Borisovka, Kal'nitsky, Berezovka, Zolochev, having 2nd CC on east bank of Gotny river with a task to cover the right flank of army, and with the same task on the left flank in region Zolochev -5 CC. Its reserve 297 RD - was concentrated in region Tomarovka. Put forward from the south in structure of 21st Army 226 RD, having a task to hold to outcome 22.10 boundary Tolokonnoe, Tsupovka.

38th Army hold boundary Ol'shany, Caravan, Gorb, Rakitnoye, Taranovka. Its reserve 76 RD - on march from region Merefy on the right flank in region Polevoe. 10th TB already behind the right flank. The opponent, being passive in the centre, actively operates on Ol'shany, Merchik station and on Taranovka.

Thanks for help Hannes Gruber