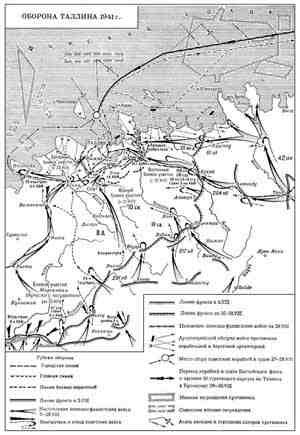 Tallin defence 1941,5-28.8, heroic defence of capital Estonian and main Military Navy Base in time WW2. August 5, Germans has left on distant approaches to Tallin, and August 8 - to coast of Finnish gulf to the east of the city, having cut off it from a land. To this time a defence of Tallin carried out Soviet 10-th rifle corps, working regiment separate brigade sea-rifle and battalions of other forces. They were supported by ships, coastal artillery and aircraft of navy. Tallin had no beforehand prepared fortifications and created three defensives were not ready. For capture city and MNB German has concentrated  60-ty thousand soldiers and August 20 was renewed offensive. The Soviet troops under impacts of superior forces withdraw on the main defence line. August 27, despite of fierce resistance, Germans has broken through  defense and has come in city, where the street fights were fastened. Carrying out the decision of the Soviet High Command, the military Council of navy has given back the order on evacuation troops and main navy forces in Kronstadt and Leningrad. Under covering of fire the coastal artillery forces began landing on ships, which, having accepted 20,5 thousand  man, to August 28 arrived in Tallin.