The line of border curved by an arch in Warsaw direction, created for German armies especially favorable conditions. Before them the wide tasks were put. By impacts of strong groupings of the both wings this group of armies should break the Soviet forces in Byelorussia, leave by mobile connections to the south and to the north of Minsks and as soon as possible grasp by them of Smolensk. After achievement of this purpose the large mobile connections owed in interaction with group of armies "North" destroy Soviet forces conducting fights in Pribaltic and in area of Leningrad.

The group of armies "Centre" disposed on wings one field army, each was cooperated with one tank group. In area to the west and to the northwest of Brests were unwrapped 4th Field Army  and 2nd Panzer Group. The Panzer Group at support of 4th Army should break through a defense of the Soviet by both sides of Brest and fast progress on Slutsk and Minsk in interaction with 3rd Panzer Group, offensive on Minsk from the northwest, to create the precondition for an encirclement and destruction Soviet forces who are taking place between Belostok and Minsk. After that both tank groups should grasp area of Smolensk.

Was planned, that 4th German Army after break on both sides of Brest will come behind 2nd Panzer Group in a direction on Minsk, that, using offensive of both tank groups, in interaction with 9th Army destroy the Soviet forces in area between Belostok and Minsk. On this site the ratio was:

The similar task was put on the left wing of group of armies "Centre" on 9th Army and 3rd Panzer Group. These forces located in "Belostok" ledge, by impacts from Suvalok and Brest on Minsk rendered the main impact.

Both these formations should break through the Soviet front in a direction on Grodno and then form northern half of pincers for an encirclement of Soviet troops between Belostok and Minsk. The subsequent task of 3rd Panzer Group was capture Vitebsk, 9th Army — Polotsk at headwaters of West Dvina river. 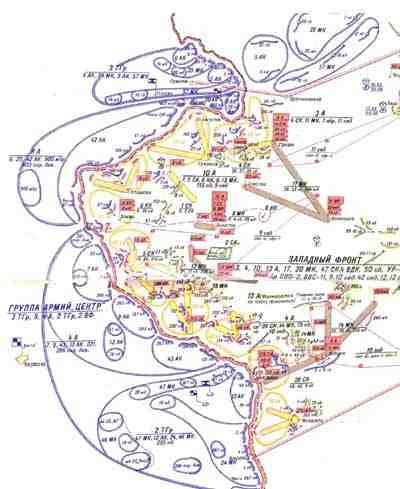 The offensive of group of armies began rather good. The Soviet forces were overtaken unawares and are perfectly stunned. On the south flank all ferries through Bug river have remained not destroy and have got in Germans hand.

Both Tank groups after successful breaks of a frontier defense are unceasing advanced on the east. June 24, 2nd Panzer Group has reached Slonim area, 3rd Panzer Group - Vilnius area. Them followed 4th and 9th German Armies. The Soviet forces wich are taking place in Belostok area, tried to retreat on the east and escape from the gradually formed encirclement. The coming tank groups at support of air forces nevertheless managed to detain a withdrawal Soviet troops so long as June 29 on the east of Belostok area did not establish connection between 4th and 9th Armies. Russian during two days undertook desperate attempts to break on the east and on the southeast and break off a narrowed ring of an encirclement. Then their forces have run low. The encirclement was completed, and July 1 the fights in this area have stopped.

Between this tank groups advanced further on the east again to carry out an encirclement of those Russian forces, which withdrawel on the east and have avoided the "boiler" in Belostok area. 2nd Panzer Group of June 27 has reached the south suburb of Minsk and has met there 3rd Panzer Group, which else on the eve, having advanced through Vilnius, has reached the north suburb of city.