The Leningrad direction and the Far North.

Most favorable for the Red Army were a ratio at the front of "Leningrad" military district, where it was resisted the Finnish armies and part of German army "Norway". 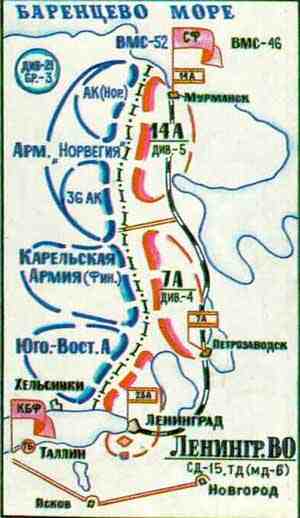 Fights on the Finnish front.

On the Far North the troops of Soviet 14th Army were resisted by the German corps "Norway" and 36th Army Corps, here again Russian had the superiority in alive forces and insignificant in artillery. The truth, is necessary to take into account, that military actions on the Soviet-Finnish border have begun in the end of June - beginning of July, 1941 both sides increased the forces, and given data reflect parties to the beginning of battle actions.