Ratio of forces on the Northwest direction.

Wehrmacht had the rather significant superiority in force and some in artillery, but conceded in tanks and aircraft. However is direct in 50 kms to a frontier strip settled down only eight Soviet divisions, and ten were in 50-100 kms from border. The promotion of the Soviet armies to border began from middle of June, but by June 22 to finish this process was not possible.

The group of armies "North" in structure of two armies and one panzer group — all 23 infantry, three motorized and three panzer divisions, was weakest of three groups of armies. It was supposed, that it will destroy Russian forces in Pribaltic and, having grasped the Baltic ports, and then Leningrad and Kronstadt, will deprive the Baltic navy of its bases. There was also a duly support of mobile connections of group of armies "Centre" coming on Smolensk. The group of armies "North" aspired first of all to advance forward by mobile connections of a strong right wing as soon as possible to reach area Opochki, to prevent a withdrawal of Russian armies from Pribaltic and to create the precondition for the subsequent fast offensive to Leningrad.

The border line in Pribaltic forced to concentrate Germans forces group of armies at  East Prussia on both banks of the Neman river and did not give any opportunities for the planned encirclement from area of expansion. 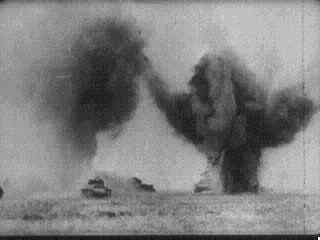 Only seven Soviet divisions stood on border with East Prussia. Others settled down by separate groups around of Vilnius, Kaunas, Shaulyay and further in rear up to area Opochki, Pskov. To this it is necessary to add, that Pribaltic countrys were considered Russian only as politic unreliable protection, in which they did not assume of a resolute defense.

In such conditions encirclement of Soviet forces from the south and destruction it was possible to carry out only under extremely favorable circumstances. With this purpose 16th German Army of the general - colonel Bush has received a task to develop offensive on both sides of  road on Daugavpils and to the north, and 4th Panzer Group - to come in the same direction to the north of  the river Neman, 18th Army- the main impact lengthways road Tilzit- Riga on Riga.