Frontier fights on the Southwest direction.

On the main impact direction of group of armies where 5th Army resisted to 6th German Army and 1st Panzer Group, Russians managed to achieve best for itself a ratio of forces. 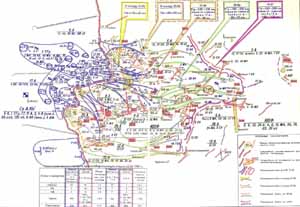 1st Panzer Group has crossed the Soviet border on  June 22, 1941. The conditions of district Galitsiya and Western Ukraine, on which it came, were far from ideal for operations of tank forces. The boundary fights were fastened. In the evening of June 22, Stalin has approved the directive number 3, in which it was required rout the German forces on it territory. The forces of 5th and 6th Soviet Armies have received the order "surround and destroy a grouping of the opponent coming in Vladimir-Volynsk and Brody direction. To outcome of July 24 grasp Lublin. The prewar Soviet plan of impacts on Krakow and Katovitse beginnings to be realized.

On the Lutsk direction

On the Lvov direction 22 June-30 June

To the begin off offensive on June 23, as that was required by Soviet High Command, was not possible. Only June 24 some of motorize and rifle corps of Southwestern Front take the offensive. However they managed only to slow down progress by not route German troops. That circumstance has had an effect also, that Zhukov and Kirponose incorrectly have defined a direction of the main German impact. Command of 5th Army believed, that the main German impact puts from Vladimir-Volynsk on Lutsk, and auxiliary from Brests on Kovel with the purpose of an encirclement of 5th Soviet Army. Zhukov has agreed with him of front has directed to area Vladimir-Volynsk-Lutsk. Actually German group of armies the main impact was to the south Lutsk in Sokal-Dubno direction. Other Soviet counterattack direction, from Lvov on Rava-Russian, on the contrary, appeared to the south of the main German grouping and too beat by the purpose. As well the distribution of German tanks on directions was determined incorrectly. Actually, more powerful tank grouping was concentrated to the south, instead of to the north from Ustiluga. In result the first impacts of the Soviet tanks came almost in an empty place and have not justified those large losses, that have incurred motorize corps. 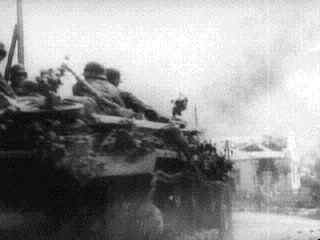 By June 30 the Southwestern Front irrevocably has lost 2648 tanks almost two third, that had to the beginning of war. And by July 9,of loss up to 3464 tanks have increased, and tanks at the Soviet forces almost did not remain.

17th German Army already after initial successes at border to the west of Lvov boundary, have met the strong Soviet forces, defence on good positions and at once has managed them to grasp. 6th German Army has advanced through the Styr river but there it, as well as 1st Panzer Group, has undergone at first in the south, and then from the north intensive Russian counterattack. On all front the persistent fights proceeded to July 3. Russian retreated on the east very slowly and frequently only after fierce counterattacks against the advance guard German tank formations. July 4, 1st Panzer Group has reached area to the west of the Sluch river, while both German field armies just pursued Soviet forces, receding before them.
Сайт управляется системой uCoz