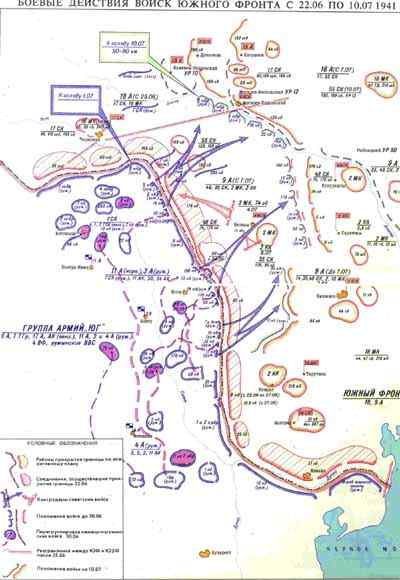 11th German Army and the Romanian forces having finished preparation for offensive by July 1, vanguard parts forced the Prut river on Korpachy site having the main grouping (up to ten field divisions, four motorize divisions, two tank divisions) on Yassy site. July 2, the Romanians forced the Prut river in Stefaneshty direction and by one field divisions also has developed offensive on Patrusheny. From Skuleny area two German field divisions, were forwarded through the Prut river and also has developed offensive in the northeast direction. The Soviet armies carrying out the earlier plan, according to conditions at the front, right wing of 18th Army, covering rear-guard a Zastsvka boundary to the southwest of Chernovitsy on the river Prut, withdrawed on defense boundary Hotin, Lipkany.

189th Rifle Division, defended on a boundary Dunayevtsy. The formations of 169th Rifle Division have occupied and prepared for a persistent defense an interval between Kamenets-Podolsk and Mogilyov - Podolsk-Yampolsk fortification district. 130th Rifle Division have occupied of Mogilyov - Podolsk- Yampolsk fortification district. Simultaneously with a withdrawal of the left flank of 12th Army the right flank of 18th Army (96th Mountain-rifle Division) to outcome of July 2 have occupied a boundary Berhomet, Storozhinets. The withdrawal of  96th Motorized Division covered by 60th Motorized Division. 39th Tank Division was in Chahor area in readiness to support 60th division. The opponent, having forced the Prut river, to outcome of July 3 has left on a boundar, Zaykany, Chuchuly, Bushila. At the front line Kosteshty, Kuban, Chuchuly acted 8-th Romanian field division and in Skuleny directions -198th German Infantry Division. July 4 at 16 o'clock 2nd Soviet Mechanized Corps put the main impact on the right flank in Nikoreny, Mosheny directions, from a boundary Bratusheny with the purpose of destruction the broken opponent to outcome of July 6, concentrated in Rybninsk fortification area, where has occupied a defense according to the plan.

When the offensive started, the 3rd Army made a rapid advance and on 5 July liberated Cernauti and by 9 July pushed out of Northern Bucovina the entire 18th Soviet Army, threatening the Soviet flank in Bassarabia

The 11th German Army started its assault on 2 July, the Romanian 1st Armored Division crossed the river Prut and advanced east. In the night of 4/5 July it fought its way through Branzeni against 2 Soviet infantry divisions (74th and 176th), supported by armored units. On 8 July it reached the Dniester (Nistru). It was reassigned to the 4th Army and on 12 July occupied Balti.

In the same time, the 4th Army had met stiff resistance from the Soviets, who counterattacked the Romanian 5th Corps with 3 infantry divisions (25th, 51st and 150th). The Romanian Guard Division and 21st Infantry Division suffered heavy casualties (2,743 and 6,222). The 3rd Corps forced the Prut north of the 5th Corps and annihilated the resistance of the Soviet 95th Infantry Division, 5th and 9th Cavalry Division. On 8 July, there was another Soviet counterattack, this time against the 35th Reserve Division, but it was repulsed and the 3rd Corps continued its slow advance through the Cornesti Massive, under constant Soviet attack. On 10 July, gen. Nicolae Ciuperca, the commander of the 4th Army decided to attack the Soviets from north.

As a result of fortnight fights by July 7 the German by forces of six field divisions and two tank divisions forced the Prut river at the Lopatniky and to press Soviet formations of 48th and 35th Rifle Corps on a boundary Mihayleny, Alunish,Bumbota, Chory. 2nd Mechanized Corps, covering a withdrawal of 48th Rifle Corps, July 8 began a withdrawal in area Zgura, Shurely,Ketrosu. 2nd Cavalry Corps, covering a withdrawal of 35th Rifle Corps, to outcome of July 9 has departed in area Recha, Redeny. The opponent tried to force the Dnestre river  in area of the railway bridge Mogilev-Podolsk but was routed by formations of 130th Rifle Division. Forces of  95th and 150th Rifle Divisions move to a defense line behind the Dnestre river on a site Goyany, Tiraspole, having 95th Rifle Division at the front Goyany, Tashlyk and 150th Rifle Division at the front Tashlyk, Tiraspole. From area of Carpathians the Romanians advanced on Chernovtsy, and one Hungarian formations has grasped Kolomya city and established communication with south flank of 17th German Army.

On 15 July the 5th Corps broke out of the bridgehead at Tiganca and advanced towards Chisinau. The fatal blow was delivered by the German 54th Corps (50th, 72nd and 5th German Infantry Division and 1st Romanian Armored Division). On 14 July Calarasi was liberated and on 16 July Chisinau. The 1st Armored Division followed the 95th Soviet Infantry Division in Tighina and occupied the city on 19 July. By 26 July the Red Army had been expelled from Romanian soil. The "Antonescu Army Group" was dismantled as agreed.

The removal of 9th Primorsk Army on the left bank of Dniepr was completed on July 24. To this time Germans has encircled from the west, north and east the Soviet 6th and 12th Armies actually which have adjoined the right flank of Southern Front. July 25 under the solution of the Soviet Hugh Command they (armies) were subordinate to the Southern Front.

October 5, 1st Panzer Division SS has left to the Azov sea in Berdyansk. There was encirclement near Chernigovka. In a result of this battle the Soviet 18th Army was destroyed.

Taganrog was fall on October 12. On October 28, Germans came to the Mius river- the last barrier before Rostov.