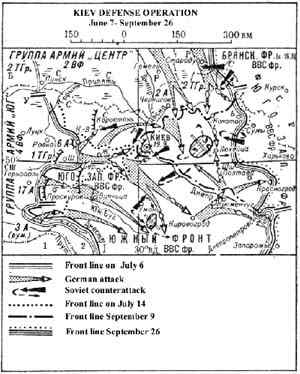 Though the Soviet forces have incurred heavy losses, but have left from Germans encirclement and  have removed forces behind the Sluch, West Bug and Dniester rivers. July 7, 11th German Panzer Division have reached Berdichev, and 3rd Motorized Corps of 1st Panzer Group and 6th Army came to Zhitomir. As a result of this German break there was a threat of Kiev capture and encirclement of 6th and 12th  Soviet Armies.

Only when the left flank of 17th German Army has struck deeply in rear and in flank of Russian Southwest Front on July 27, the "Uman" encirclement began to appear.

August 22.  German offensive, with purpose to destruction of Russian forces in Kiev area, was began.

September 26 the battle was finished. In the report of German Supreme Command during battle of Kiev Germans capture 3718 guns, 884 tanks and take in captivity 665 thousand Russian soldiers.

On Russians source the casualties were: